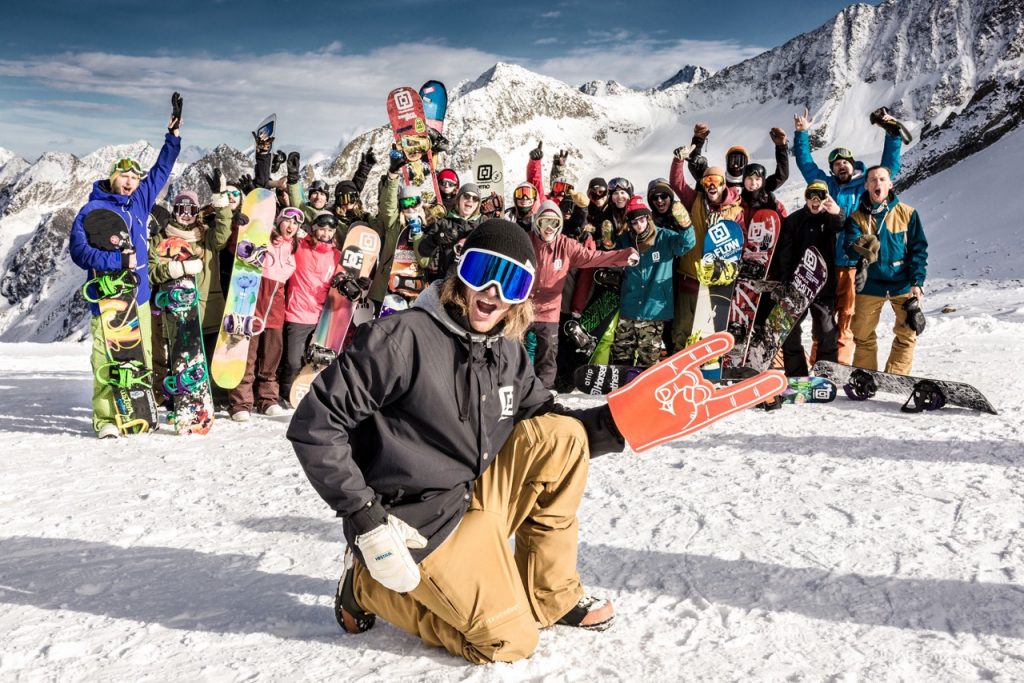 Nowadays it seems that brands are pulling back on their budgets, dropping team riders, lowering their marketing budgets and pressing the panic buttons, left right and centre. Horsefeathers on the other hand have signed multiple team riders in the past years, become the main sponsors of several big European contests, increased the size of their product collections and have grown their brand awareness ten fold. Horsefeathers started as a two man show in 1989 but now the company is flourishing where many others have perished. Here we speak to Horsefeathers marketing manager Tomas Koudela for the full story behind the brand.

What exactly is Horsefeathers, where does the name come from?

Haha, well the story about the brand name Horsefeathers is really interesting. The whole idea of Horsefeathers began in British Columbia in 1989. Hanus (Hanus Salz, co-owner ) grew up there with a bunch of friends, skaters and snowboarders, who were really visible between all the farm and rural kids. Hanus spent the most time riding around with Stewart Carlson and Joel DeVille. Stewart’s grandmother came from England and when the boys went riding she screamed at them and used the English slang “horsefeathers” in the sense of him being foolish: “What are you doing horsefeathers?” The name made them laugh and eventually in one of their art classes, Joel made the first ever Horsefeathers logo from the linocut. Then came the first few stickers, then t-shirts and the Horsefeathers story began. For Americans the brand name is pretty strange, we know that. In Europe, most of the people think it’s a combination of horse and feathers, like a winged horse, but this is totally horsefeathers haha.

Horsefeathers has been around since 1989 and was originally a 2-man show. How did the brand start and what is the secret for being in business that long.
Actually, I think the reason why Hanus and Pavel started the brand and why they are still in business is the same thing, why? It’s the love for snowboarding. Snowboarding stood strong at the beginning and was the main reason why they have established the brand, I also think, that is the main reason why Horsefeathers is still working and develops every season. When the main engine of the company is just to increase profits, the ability to resist changes in the market and still push it in the hard times is lower, because profit gets affected first. When someone is doing something because they enjoy it, it is affected way slower. They, and even the whole company are still snowboarders, just check the elbow-carving Hanuš did with Tyler on Stubai Premiere below, so much fun. Of course, there are plenty of other things that are important for the company but this is long and boring business talk. Essentially, we just try to do things well and enjoy it. 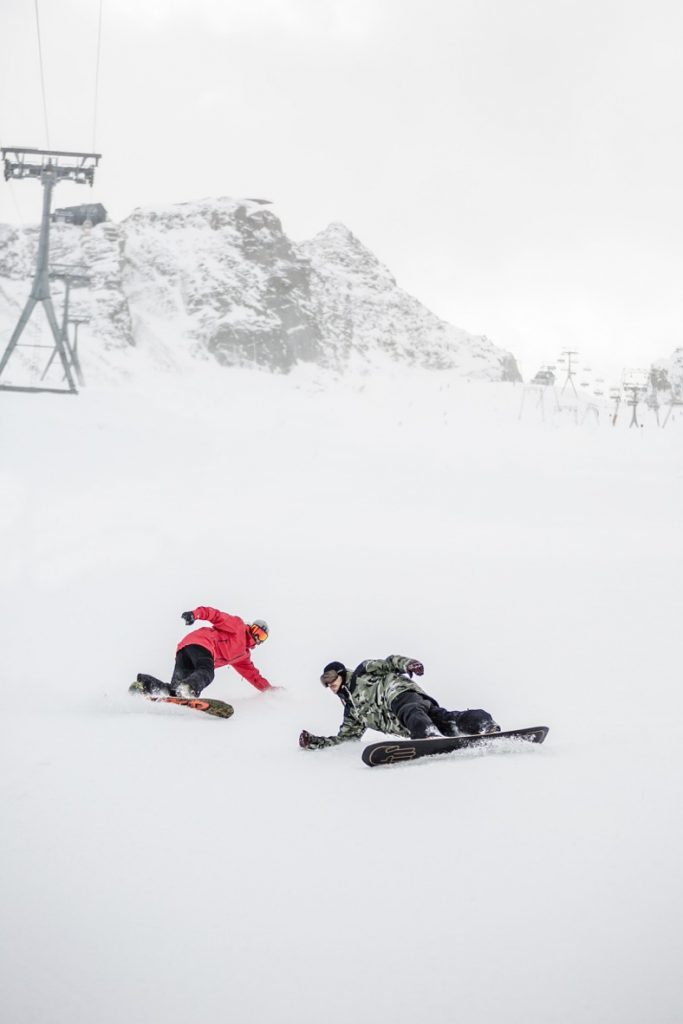 In the past few seasons you have signed Tyler Chorlton, Eiki Helgason, Måns Hedberg, Antti Jussila and more recently Klaudia Medlova to the team. What attracted you to those riders and what plans do you have for them?
Each of them is unique, I like riders who have something others don’t. It’s not just about the riding and tricks but obviously that is important too. Tyler is a legend, even though he is still young. He is a unique person and enjoys the terrain like nobody with hi-speed, easy style tricks. Eiki is incredibly creative, doing tricks that no one else does. Måns is the man, I really love his style. He is doing every trick so easily that I feel that I could still do it too, hehe. Antti is a stylish street rider, smart guy and good buddy and Klaudia, well, we took her only because of her smile haha. No, just kidding, of course, her tricks and style are incredible! But there are more riders and we are stoked to have them in the team.. Slovak rider Zoltán Strcula with his sick jibbing style, Horis who represents the Czech’s worldwide, young gun Marcy is incredible, he is only 10 years old and kills it, Sane! guys Steve and Michi, Loris, Nikolay and Egor from Russia, the whole Czech crew and many others.

We work with them individually as well as together as a team. Everyone has their own individual projects for which we try to provide maximum support and then we have team projects, where we always try to get as many riders together, as their schedules allow. The best is, when the whole HF crew meet together, both the riders and office crew. Then you know why you are doing what you do!

Whilst you are signing riders, many brands are dropping their team riders. What do you think the advantage is in having a team and why are so many brands releasing team members?
I think, the key point is the same as in the second question. If the company is only concerned about their profit margins, then riders are just costs. For sure, the rider and his activation is a cost, but if you are snowboarding driven company, riders are an integral part of most processes. From products development, testing, feedback on products etc. Obviously the riders are a huge part of the marketing and especially and importantly is that they create the energy that supplies not only the brand but also in the people working for it. I saw the faces of colleagues at the “Ísland Born” premiere in Prague and how were stoked and proud they were. This is the best motivation, when you want to be a part of what’s happening. 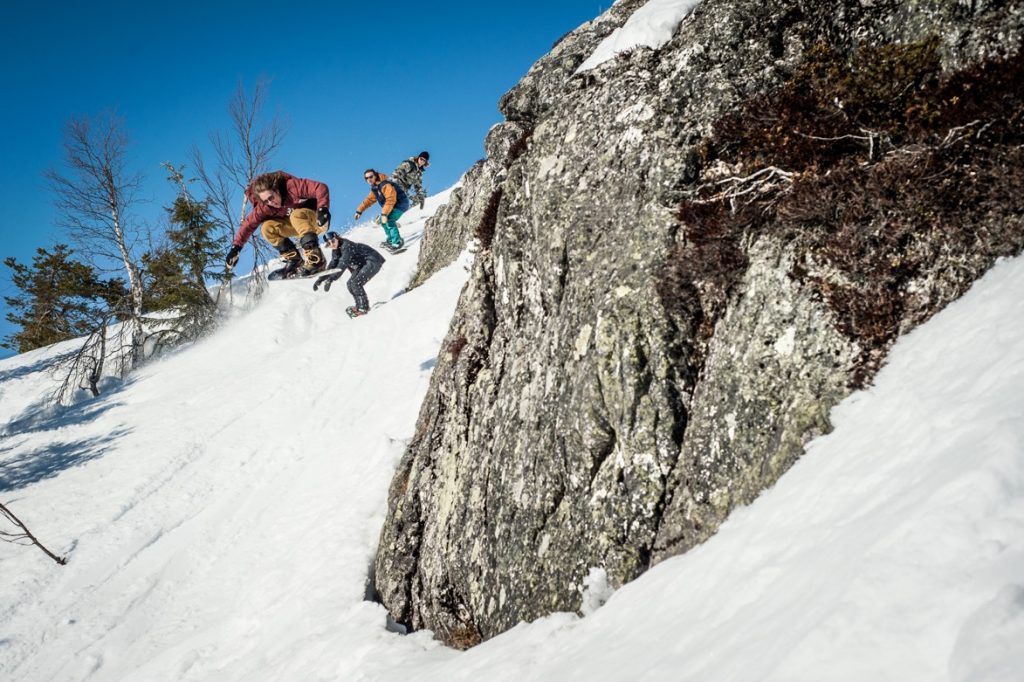 Eiki and Tyler have their own signature collections for 17/18, will your riders have more say in the brand direction and look of the brand in future collections?
This is absolutely key for us. We are trying to get them involved as much possible because rider’s feedback is the most valuable. They use the products way more than normal consumers and as the level of riding is higher, the expectations they have for the products is also higher. Therefore, when they come with some changes, it can sometimes seem like overkill for a normal consumer, on the other hand, when you reflect this into a product and you know that it can withstand a load of team riders, then the normal consumer is 200% backed with the product. The quality of our products is one of the three cornerstones of our company: the highest quality at an affordable price, excellent customer service and most importantly, still enjoy it!

Horsefeathers has been pushing for an eco friendlier world but what exactly is the Sick of Trash campaign and how can people get involved?The Sick of Trash project is more of a movement than a coordinated campaign and it is actually a pretty selfish thing. We’re not trying to force anyone to change and tell people that we are a super eco business, nor are we are looking for cool eco-stickers and super cool eco-names where they are not. Sick of Trash is selfish simply because we love nature and we hate when it’s a mess all around us. We try to just motivate people to clean up after themselves and not to litter in the first case. You don’t want to see papers, bottles and other rubbish when out freeriding, so be Sick of Trash and join us! As a company, we behave ecologically, but we do not use ecology as a marketing campaign, rather, it comes from us and what we like.

The first Horsefeathers store opened in 1995 and since then you have opened a further 4 stores, what is the key to your success on maintaining and growing these stores?
Yeah, the first store opened in Pilsen in 1995, the old pics look great! Our retail strategy is that we do not push too much on becoming much bigger. We are not planning to open new stores each year or stores in these cities, etc. We try to do the retail business in the same way as the brand. We are choosing only the best locations and every shop has to look perfect and the customer’s service from our staff has to be great. I’m not afraid to say, that our shop crew is one of the best in the world. They like what they do and they know the value of the service. The key to success is definitely the location, look, product range, but mainly it’s down to the shop crew, this is absolutely essential. Nothing has bigger valuable in retail than people. 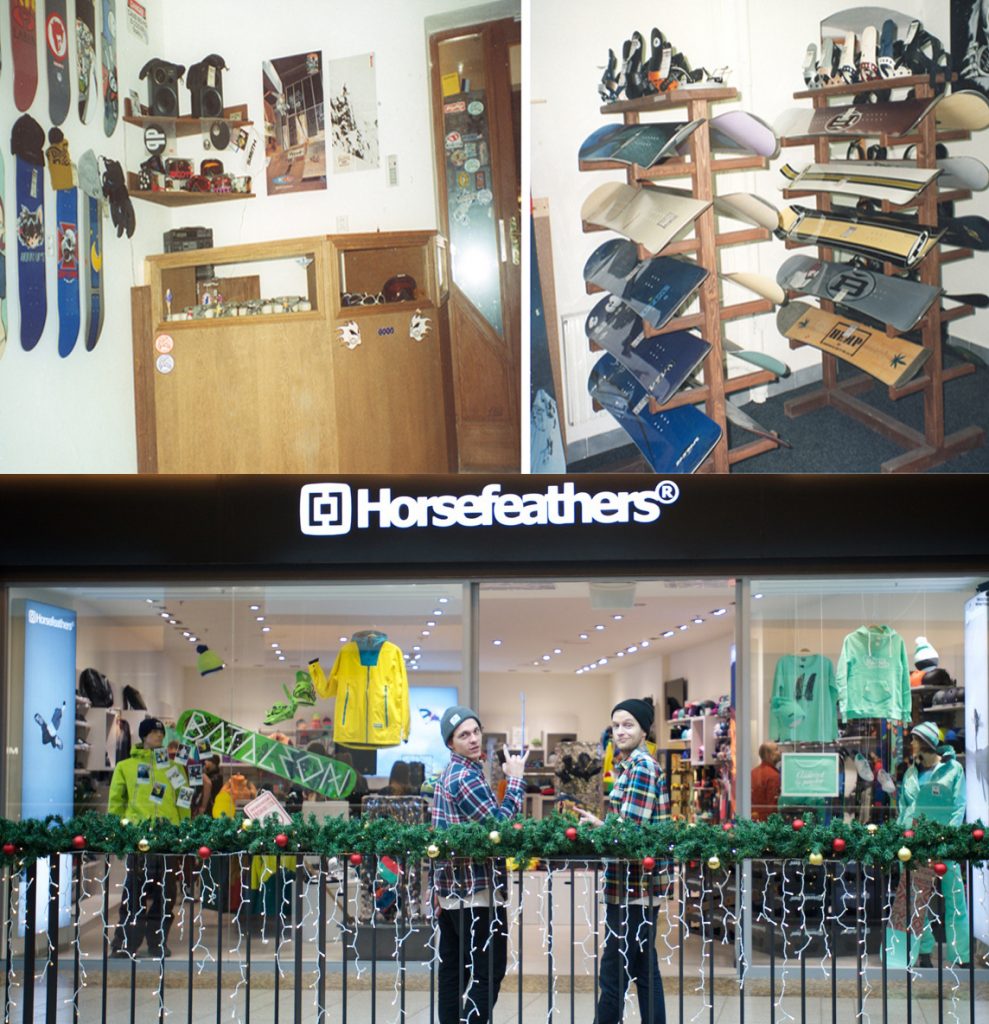 On a similar note, a lot of brands are pulling back on budgets whereas Horsefeathers seems to increase their budget yearly. You have been the main sponsor of the Horsefeathers Pleasure Jam for a few years and also for The Horsefeathers City Jib, do you have plans to become the main sponsor for other events?
Budgets are always a tough thing. They need to be in balance with what the company generates and that’s how we are trying to do it. Sometimes it’s hard to cover everything you like to but that’s life hehe.

Regarding the Horsefeathers City Jib, we are not just a sponsor, we are running the whole contest. We gave it a rebirth last year after a seven years absence and it was amazing. The best atmosphere I’ve experienced. Unfortunately, we will not be able to do it again this year, as we had to face some last minute troubles with the location we selected in Prague. We regret it hugely, but we decided it’s better to do it bigger next year than to do it worse this year. So we prefer to wait one year and absolutely smash it in 2017.

I think we have been the main sponsors of Pleasure Jam for around 3 years and I still consider it one of the best steps that we did at that time. The whole cooperation with Qparks was cool. I would like to cooperate with some other resorts again, but it’s a matter of finding the right one, with which it would be a closer cooperation than just a brand paying to have their logos around the place. Overall, we are trying to do everything to make it work long-term for both parts. With events we prefer to do our own thing, rather than to just be a sponsor, because of the control you have over the whole process. But if there will be some cool ones that will fit in our budgets, we will be more than happy to support it.

Where would you like to see Horsefeathers in the next 5 years?
Well, that’s easy. As a company that has a crew who enjoy what they do, who love snowboarding and are happy to be a part of it. I’m so happy, that we have a team like this now. Thanks, everyone around HF for the hard work and the effort, I am so stoked to be a part of this squad.

Great season to everyone! 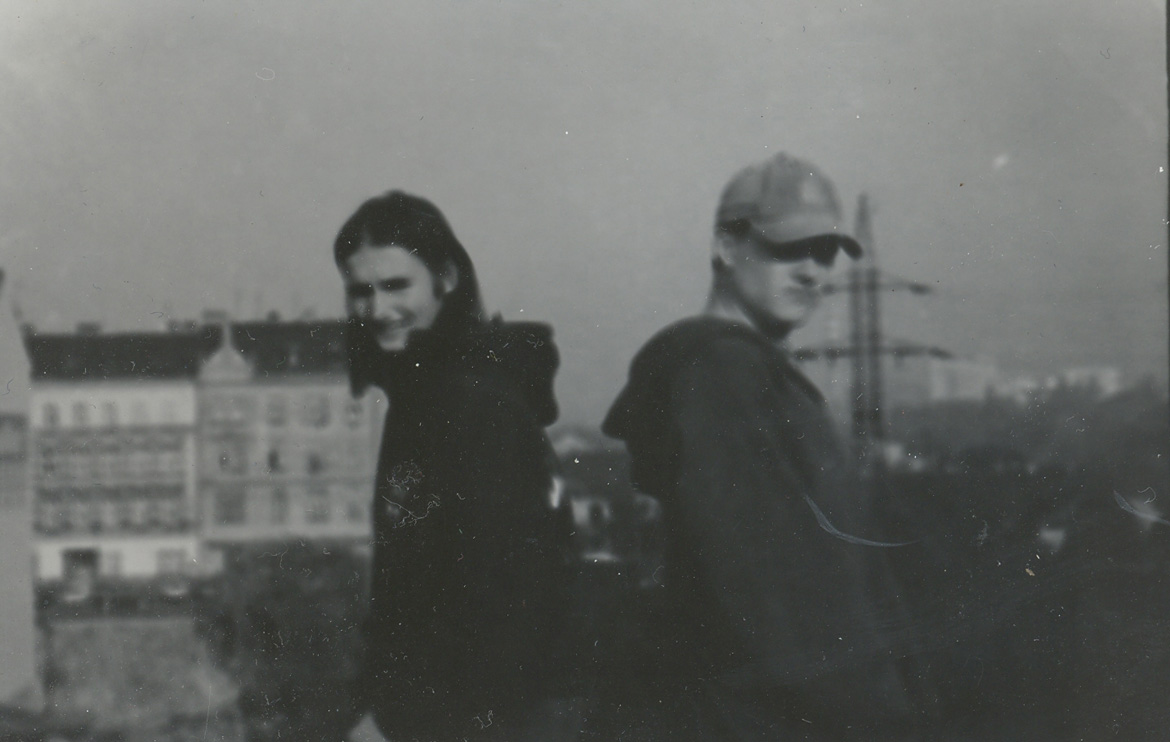 To find out more about Horsefeathers and to buy from their current collection head over to their company website here.