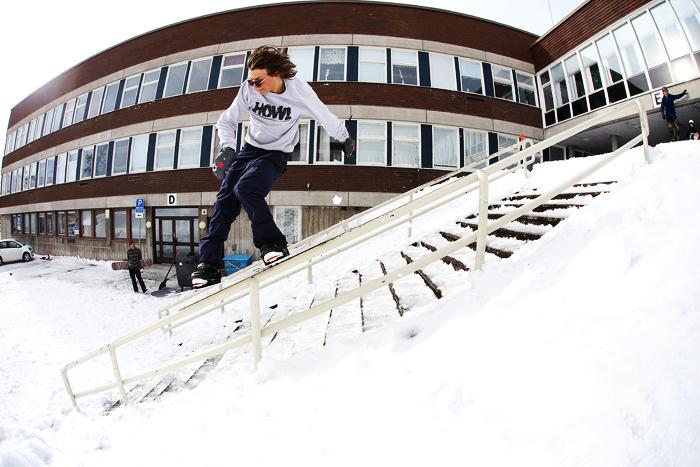 5-0 back 1 out in Kiruna.
Photo: Tim Schiphorst
www.postlandtheory.com

We weren’t even sure if Kas still qualifies as a Milk Teeth interview, as he has been creating a storm all over with his next level street parts. His b- footage parts have had other rail riders weeping and have been shared all over the inter web. Kas is as friendly and laidback as they come, combine that with his insane urban riding capabilities and you have all the qualities of an amazing snowboarder.

If you had a dream trip where you could go anywhere and bring anyone where and who would you go with?

I really would like to go to the states once. See how it’s over there and I would probably bring one of my buddies, whoever are down haha.

Would you rather ride a perfect street rail set up or champagne powder?

I don’t know, I’ve never been snowboarding in deep powder yet haha. It’s probably both fun, and just really different.

Who is in your crew?
Pretty much all the guys from Postland.

You are turning a lot of heads with your edits and winning rail contests, what gives you the most satisfaction? Competing or filming?
Definitely filming! Rail battles can be fun, but most of the time it’s just a down rail and a double kink and you’re just gonna see the same tricks over and over.

You’ve got hooked up on some strong US brands but are not yet on the pay books, do you think it’s harder for European riders to make a name for themselves?
Hmm. I don’t really know. Maybe it’s harder for Europeans, but I also think the average level in America is way higher than over here. Europe is mostly just following, with some exceptions of course. There are a few people in Europe that are killing it too.

Which riders do you look up to?
Joe Sexton, Jed Anderson, Jake OE, Scott Stevens, Danimals, Darrell Mathes, Benny Urban, Wessel, and the rest of the Postland people are snowboarders I really enjoy watching. But there’s actually a lot more people.

How many hours do you spend on snapchat a day?
Haha! I don’t know, but probably a lot!

What is your goal for snowboarding?
Keep doing it as long as possible.

Would you take up the offer of being a full time pro but you were only allowed to ever ride indoors?
Nope. Indoor halls are fun but snowboarding out in the sun is way better.

Your life would be easier if what?
My life is already pretty easy!

What is the worst trip you have ever been on?
Luckily, I haven’t been on that trip yet. They are always pretty much the same, good times with some downsides too sometimes.

Check out more edits from Kas from postlandtheory