Will Smith has been around for a while now but his riding has gone from strength to strength in recent years. With standout parts in The Grindhouse, including last part in the 2014 release, Mind Games. Will has also started filming for Dutch production company Postland theory as well. Not only has Will got a busy filming schedule, you can find him in legit rail contests such as Rock A Rail, spring break rail battle. Will’s got a bright future ahead of him and a mean method; let’s find out more from the man himself.

You film with UK production crew The Grindhouse and Postland Theory. What is the best trip you have been on and also the worst?

Yeah, it’s always a good time filming with the Grindhouse, every trip is sick though, it’s always super fun because we are all just good friends and have been for a while now so it’s perfect for filming. The best trip would probably be Minnesota this year, it’s been a dream to go there for so long so we were all stoked to go and they had pretty good snow when we were there. It was so cold though, as it was when that storm was going through that side of the states and all the city’s were shutting down. There’s never really a bad trip but I’d say Finland, the trip we went on after we got back from Minnesota. I have never seen Finland with so little snow it was mental. It just seemed to rain and rain so it made it super hard to get anything done because you physically couldn’t gather enough snow to hit a lot of things but it did open up some new spots because normally they would be buried in snow at that time of year so that was cool as it’s always nice to find some new things.

You are often found riding indoors, for people that haven’t ridden in a fridge before, is it similar to riding in a resort? Is that where you learnt to ride?
No I learnt to ride on dry slope up at Halifax when I was ten so Castleford wasn’t even built then! I started riding cas when it opened, ever so often mainly if there was a comp on and then over the years just started riding there more and more. It isn’t like a resort as there is not much slope so you can’t just blast around you just get so many laps on a four feature line which is perfect I guess for getting consistent as the conditions are always the same but the park changes every week which always keeps it fun!

A lot of people compare UK riders with Dutch riders due to the no mountains/ fridge connection. Are there big similarities there? How does the riding compare?
Yeah definitely there are a lot of similarities as the domes are the same pretty much but they have permanent park so they get to go ride when ever rather than only Thursday and Friday nights. All the Dutch dudes kill it though the Postland guys are really good friends too there all such beasts! I’d have to say the Dutch level is probably higher in the domes though

Who do you usually room with on filming trips and what dirt can you dish out on them?
Erm I usually room with Ollie Dutton he’s a real good friend of mine and have been for a while we travel around a lot together in his little c2 when we do trips in Europe to resorts at the start of winter and we are in Holland a lot. Haha hm he’s a good dude he puts up with my night terrors so not really got much dirt to dish on him haha. 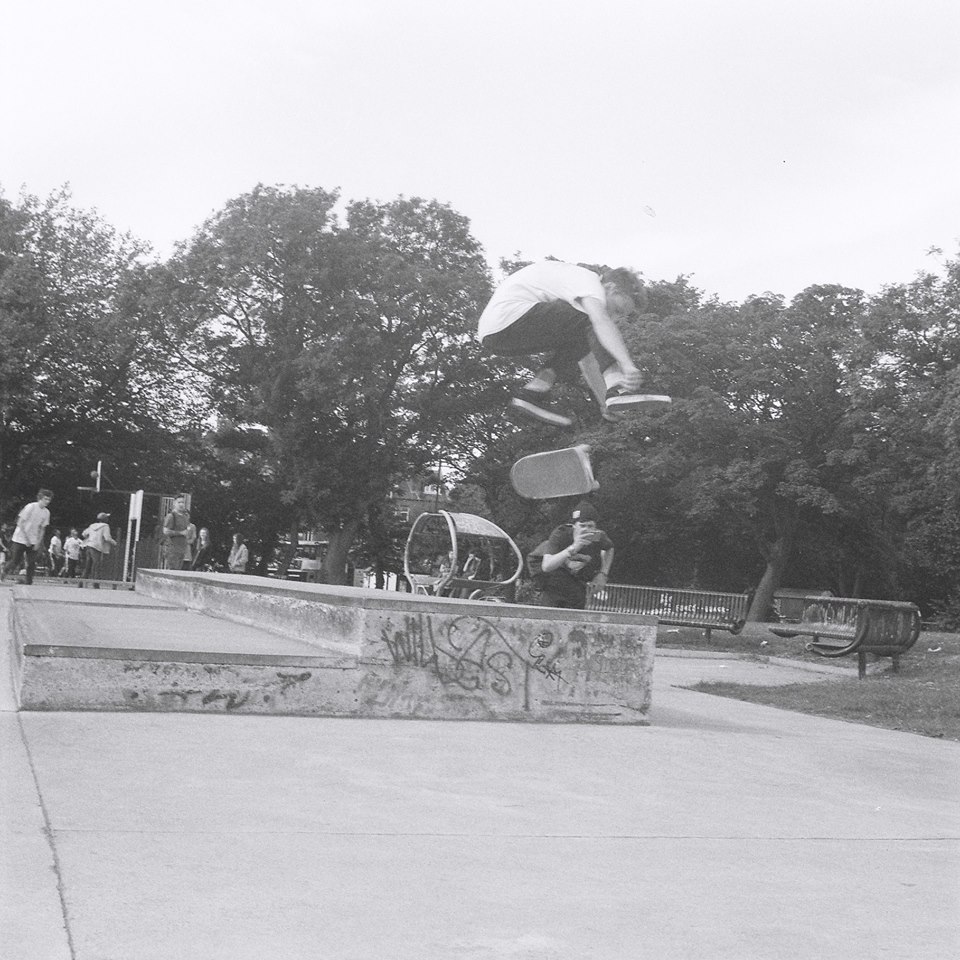 Will’s handy on a skateboard too.
Photo: Ian Thrashmore

You are best known for your rail antics but also won the method contest at this year’s spring break. Would you like the chance to film more kickers in your video parts?
Yeah definitely not really park kickers I respect the dudes that are hitting these huge jumps right now but that’s not for me its gnarly haha. I would love to film more powder jumps I got a chance to last year and I was stoked to have that in my part but I didn’t get the chance to this year sadly which was a shame but that definitely something I want to do its hard but it’s a nice challenge I definitely got put out of my comfort zone in Colorado last year. It keeps it fresh though and it’s good to not limit your self to just riding rails.

How is your part looking in the upcoming Grindhouse release?
I got sent a first draft by Durham the other week actually and I am never stoked on my part but I am happy with it for sure it’s definitely got stuff missing but I filmed a part with Postland this year. I feel what my Grindhouse part is lacking my Postland part has and the vice versa

Why do you roll up your pants like that? Have you seen anyone else copy that style?
I dunno really I started doing it because I always ride with Jonny Russell in the dome and I just started doing it every now and again and then I just kept them up. I love the D.O.P.E movies and those guys do the whole rolled up boots thing but I wouldn’t like to say that’s the reason I do it. Our friend Tom Honey moved to a Kelowna a while back and he did it that’s where Jonny got it from I guess. I don’t know if people hate on it or what but I don’t really care it feels good so why not.

You’ve been travelling way more and started hanging out with US riders a lot more. Is there a huge difference to their ability compared to UK? Is there anything that they approach differently to their riding?
Yeah I am stoked on how much I got to do this winter! Yeah we hung out with the videograss dudes for a day in Minnesota in a park and just rode some benches and trees and had a couple of beers and a fire it was sick! Those dudes are all super nice and JakeOE is a good friend from coming over to the UK a couple of times so that’s how that happened. The level of those dudes is sick though they know what there doing they’ve had experience with it and the dudes from Minnesota grew up riding handrails I guess, so it’s yeah they know what there doing for sure. Everyone’s the same though they just love going snowboarding and filming video parts.

Obviously your name is Will Smith, do the US guys act surprised when you tell them that?
Haha I don’t really know there is always a bit of a joke or something it’s more just random Americans I meet that always ask me if they know there is a famous actor called Will Smith which is kinda funny. As if anyone hasn’t heard of him.

What are your goals in snowboarding?
My goal is to just keep snowboarding as much as I can really and make sure I keep enjoying it! I just want to keep filming video parts I just love the whole process and I like being involved with how the whole movies put together too I really love to be involved with filming a little bit too always try and help out so keep doing what I am doing really.

Would you ride for a shitty brand if they paid you enough?
It depends if it meant that I could go snowboarding more and give me good opportunities then I don’t know. Just because a brand isn’t cool or “core” as long as they treat you well and are down with what you do as respect that then fuck it it’s only a logo or a sticker on your board. As long as I didn’t change my snowboarding because of it then probably yeah why not. 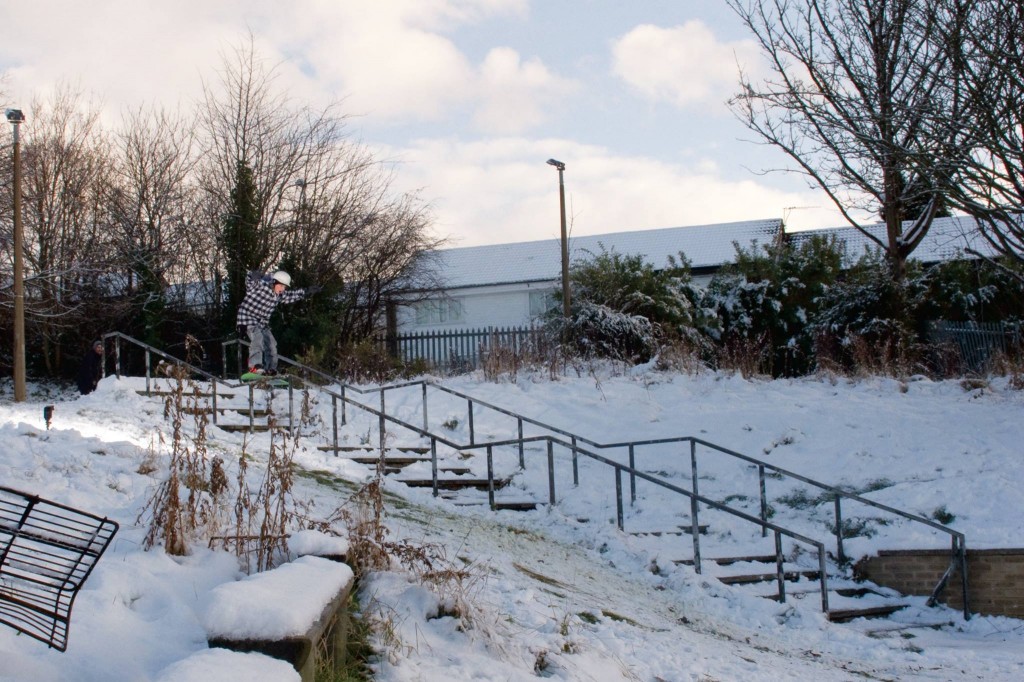 Oldie but still a gem. Will riding on home soil in Leeds UK.
Photo: ian Thrashmore

Thanks to Ian Thrashmore and Sam Oetiker @ Onboard Magazine for the photos.