Koski got pop at the Onboard Send Off Session.
Photo: Tom Copsey

You would be hard pressed to find a rider that has done as much for Finnish Snowboarding than Markku Koski. A regular in snowboarding’s biggest contests (including an Olympic medal )and appeared in countless video parts. Markku can ride anything and has thrown down on slopestyle courses, big air contests, street rails and the backcounty and has to be one of the most versatile riders ever to exist. This wealth of talent, combined with a love of snowboarding has provided with Markku with a long and prospherous career that has keeps on going.

It seems like you have been around forever, but you are still just 33 and showing no signs of slowing down. What keeps you motivated to keep riding when others have quit?

Haha, just 33?! Well to be honest I wouldn’t wanna be any younger. I’ve always rode just for the fun of it, not to do good in contests, not for sponsors or to get money. To me the main thing is to love what you do or not do it at all. I think that is the biggest reason why I have kept going so long and also that there are so many sides of snowboarding and always to learn something new!

Finland has so many talented riders but it seems just a handful of those get a chance to film parts with huge US video production companies, why do you think that is?

Well back in the days it used to be that all the Finns where filming in the US, but seems like nowadays the market over in Scandinavia and Europe all together hasn’t grown that much and the US companies have put a lot of focus on their own riders, wanna get them in the movies and team so not as many Finns get picked up. Also, jumping used to be big back in the days and Scandinavia had lot of good freestylers compared to the US. After the focus on the films got to the rails and street, the US had so many riders that the euros got kinda left out. 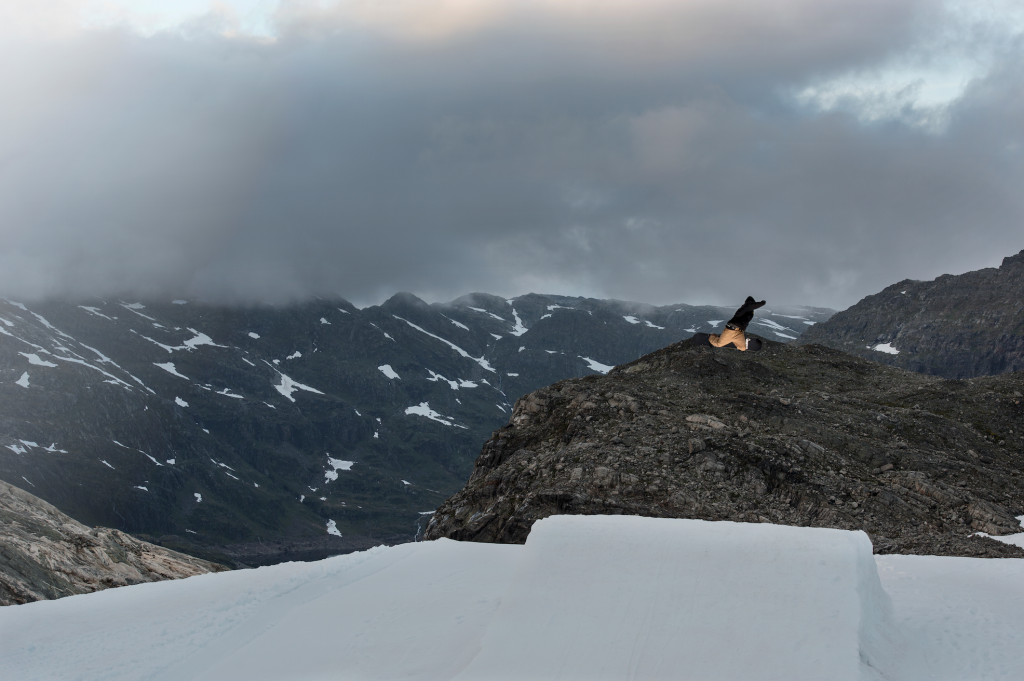 Do you think Finland is overlooked by brands when it comes to picking riders?
It sure feels like it when I’m riding my home resort and see the level of riding. But at the same time Finns are quite antisocial and just want to ride at home and not travel that much so it’s kinda understandable. Also, as I said before the snowboard market over in Finland isn’t that big, so if you don’t get out of Finland its hard to get sponsored.

You can ride street rails, kickers, pipe and backcountry equally well. It seems nowadays riders will focus on one aspect of riding. If you had to choose one to pick what would you chose?
Hmm, that’s a hard one. That’s why I love snowboarding cause there is all those things to do. I’ve always respected the guys who can ride it all and wanted to be one of them. But if I had to choose one, I would pick backcountry cause I suck at it and it never gets old to do a pow turn. But what it comes to riders focusing on just one aspect of riding, I think its quite natural progression of the sport, at least in the competition scene. I guess eventually snowboard movies will be the same.

What gives you more satisfaction, doing well in a contest or filming a banger video part?
Filming for sure. I grew up watching snowboard movies and that’s what influenced me. One of the first movies I saw was The Hard, The Hungry And The Homeless. I think for me, contest results get old but films don’t. Also, my best memories from snowboarding are from filming trips and not from contests. 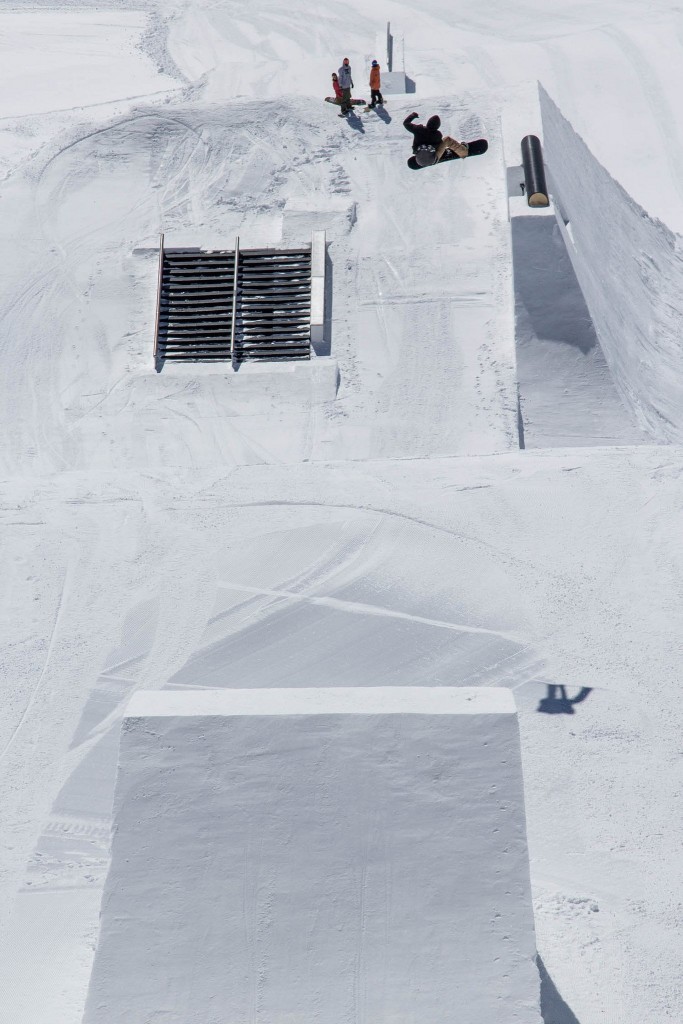 Going off and the send off.
Photo: Tom Copsey

What have you been doing this season in terms of riding?
Just riding actually, not much filming yet and not one contest. I’ve been mostly riding park in the US and Finland. I still love riding a good, freshly groomed park, it’s so fun. But I would mind hitting some pow soon. It’s been few years since I last got some really good pow turns.

You must have seen a lot of changes both positive and negative with snowboarding, what is the major change you have witnessed?
I guess the biggest change in general has been going from positivity to negativity. Back in the days snowboarding was our thing, conditions didn’t matter, money didn’t matter, and just being on the board brought everyone together. Nowadays people still love snowboarding but its way more complaining about conditions, industry or what not, even hating. I think sometimes people should think more about the roots and why they snowboard in the first place.

Now you are heavily involved with the newly launched Vimana snowboards, what is your role within the brand and what attracted you to the company?
Vimana has been like winning the lottery for me. Tronna the owner shares a lot of the same ideas about snowboarding as me so it has been great to work with them. I’m there as a team rider but try to help out on anything I can whether its the gear, graphics or marketing. I love the fact that they are not trying to be something, just doing their thing, being humble and keeping snowboarding itself the priority. Also, getting the chance to ride in the same team with Freddy Austbo again made me wanna be part of the company even more. When he first called me up to join the Vimana team we just kept laughing for like 15 min straight on the phone, we had to hang up as we weren’t able to speak anymore. That says a lot about Freddy, there´s just never a dull moment with that guy! 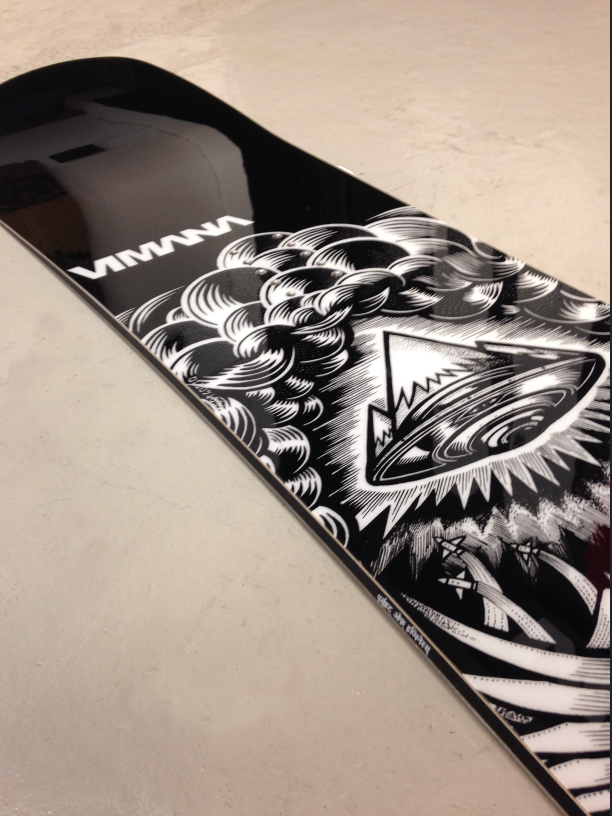 Do you see Vimana as a pathway for you after you hang up your professional boots?
I never saw myself as a professional snowboarder, just as a snowboarder and I will never quit riding 🙂 But yeah, I would be very grateful to be able work with such a great bunch of people one day, Tronna, PJ, Freddy and all the others! It’s been such a great vibe around Vimana so hopefully that will take us a long way with some great memories.

You also have some involvement in the Finnish national team, which riders in your opinion will be future stars?
Yeah, I’ve been traveling a bit with the Finnish team as a “team ambassador” trying to film, keep up the positive vibes and help anyway I can. As for the girls there is Henna Ikola who is already a great rider and also a really good skateboarder that will help her a lot. With her attitude I think she has a bright future in front of her. For the guys there is a bunch of riders but I really like Rene Rinnekangas. He’s like 16 and really well rounded rider and rips what ever gets in his path!

Breckenridge and Keystone With Isak Ulstein