Whilst some people state that it’s the board’s performance that is the most important factor of buying a board, graphics obviously play an essential part of the process.
There have been so many good graphics in snowboarding that we could have made this the top 100 but no one has time for that so here is (in no particular order) our top 20 iconic board graphics of all time. 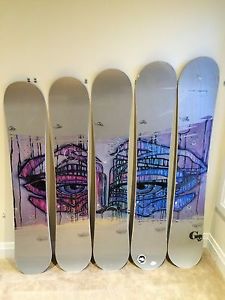 Burton Balance 2000
Terje’s 2000 Burton Balance series is one of the only collectable boards from this century. With artwork by the legendary Mike Parillo, collectors will try and source the 5 lengths to form the entire graphic.

With corks on every spin, goalkeeper gloves and a huge obsession with cheese, Frenchman David Vincent was not only an amazing snowboarder but a very entertaining individual. His pro models with the now defunct A Snowboards always featured magical elves and magical mushrooms and this is our favourite from the years. 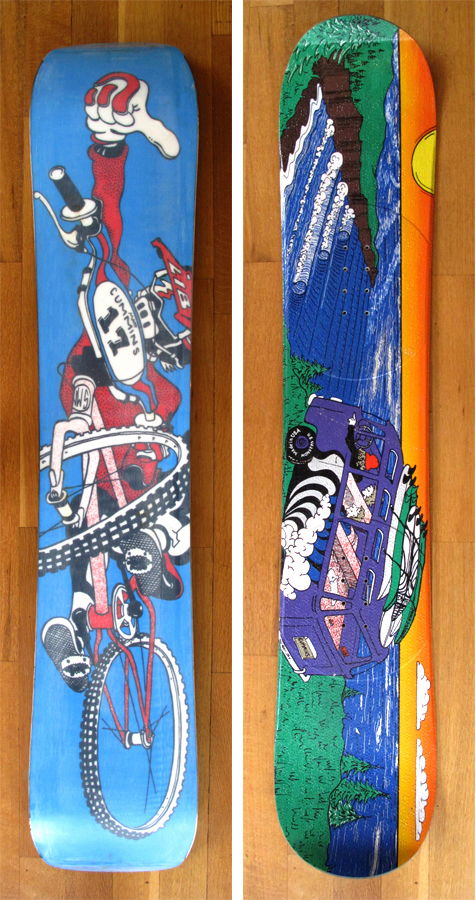 LibTech Matt Cummins, Radical Rik 1994
Matt Cummins has the longest running pro model in snowboarding at 25 years. He was one of the first riders to design a twintip snowboard and consequently opened the door for freestyle snowboarding. Although this was Matt Cummins promodel, It was Jamie Lynn who got tons of coverage on this board. 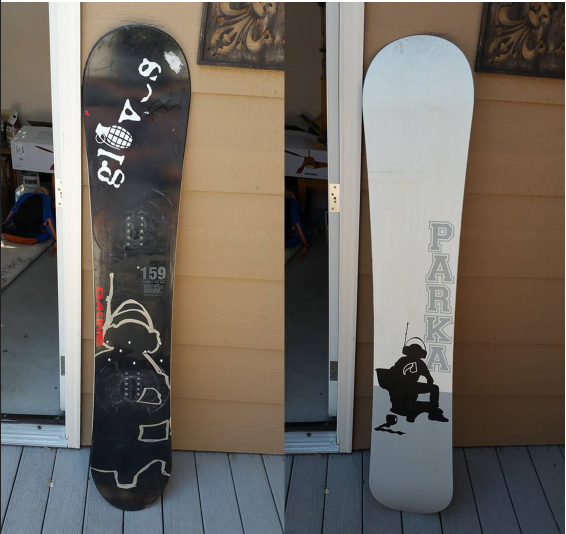 K2 Travis Parker 02/03
Travis Parker always produced humor infused video parts and this homage to Chad Muska’s Shortys deck is true testament to his sense of humour. Other Travis Parker decks that almost got included are his Capita grab guide board and his K2 Wildstyle.

Burton Love 2008/09
Coming out in 2008/09, The Burton Love is the most modern series of board in our list. To say it created a storm on release is an understatement, with some shops refusing to sell it, others covering it up in the store and angry mums complaining about the nudity on their teenagers new board. Consequently the series has become a huge collectors item. 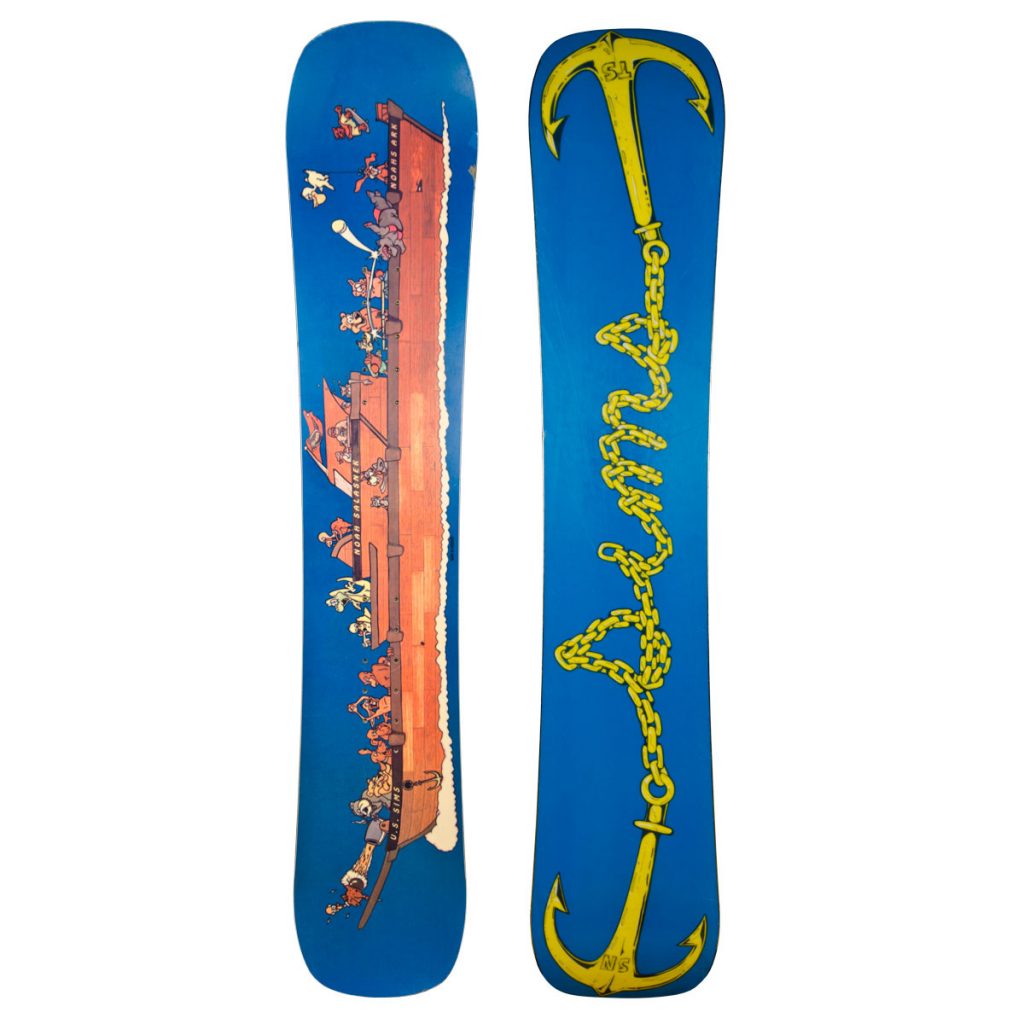 Sims Noah Salasnek Ark 1995
This was Noah’s second Sims pro model and the only pro model we can think of that were back to back classics. The shape wouldn’t look out of place in boardshops of today.

Lamar Mike Ranquet Gibson Les Paul 1994
Mike Ranquet played a huge role in pushing freestyle snowboarding towards a skate style evolution with his insistence to call out non skateboarding tricks. Ranquet could ride everything equally well and is best remembered for his parts in iconic movies such as Roadkill and Creatures Of Habit. Although he had a few promodels on several brands, this Gibson Les Paul model is a timeless classic. 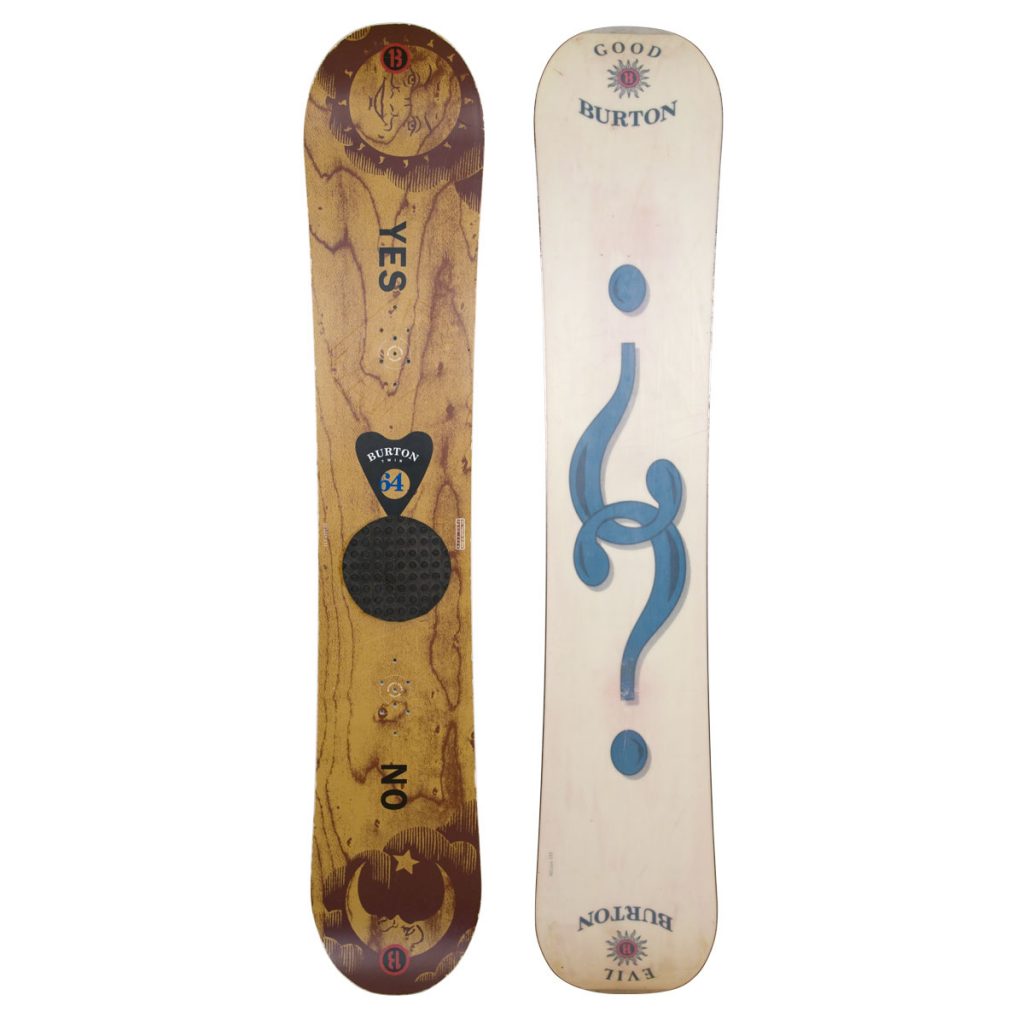 Burton Ouija 1994
In 1994 jibbing exploded and Burton responded by bringing out the twin. With their 3d hole system that allowed for maximum stance widths the twin was a popular choice for the masses. Bryan Iguchi made this board even more iconic with his parts in Roadkill and TB2

Division 23, Peter Line 1996
Peter Line has always been a creative and diversive individual, which is obvious from the legendary status he has acquired from video parts, founding Forum, Foursquare and countless other iconic imagery. This 1996 Peter Line pro model went against the grain of other graphics of the time and captures Peter’s creativity. Capita almost shut down the internet with the release of their tribute to this board last season.

Burton Michi Albin 2002
This was surprisingly Michi Albins’ only pro model with Burton but any board with graphics from skateboarding royalty Mark Gonzales is guaranteed to be a iconic release. With a one off shape, glow in the dark ghosts and Mark Gonzales incorrectly spelling Burton as Burtin, Michi Albin’s pro model is fondly remembered. 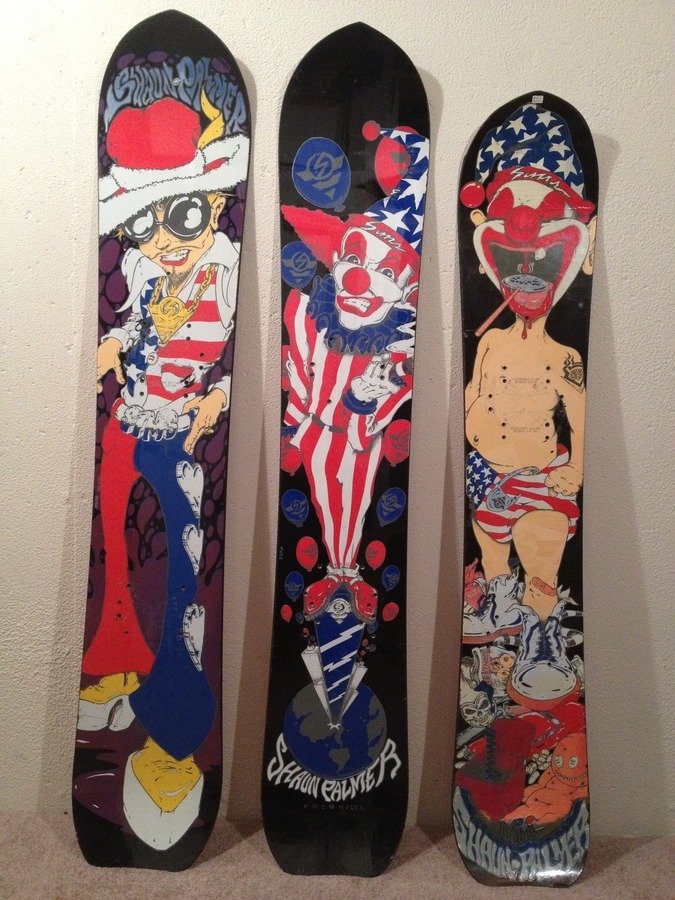 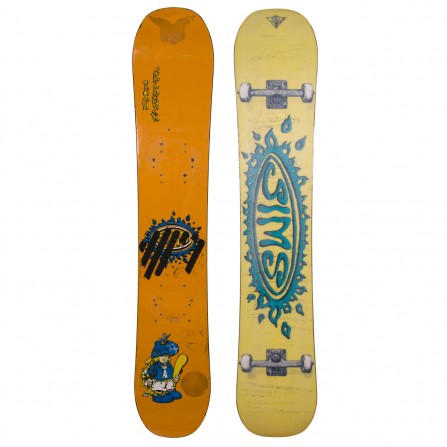 Sims Noah Skate 1994
One of the most recognisable boards in this list and one of the most desirable boards of all time. Noah successfully switched from a pro skate career into snowboarding and this 94 classic pays homage to his roots. Sims are re-releasing this board to help fund Noah’s medical treatment, find out more here. 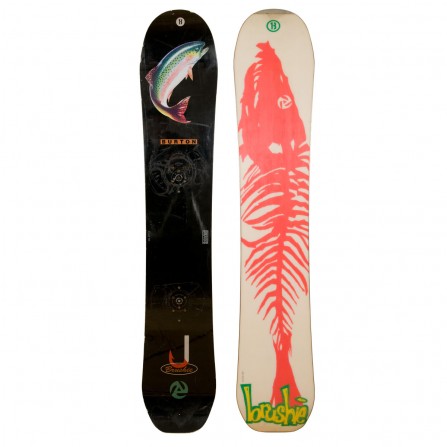 Burton Brushie Trout 1993
Jeff Brushie has had multiple iconic pro models but this is the one that stands out for us. These graphics are so recognisable and have been reproduced on mitts, t shirts, lighters and heaps of other items since. Burton are re releasing this model for 16/17 much to the joy of collectors worldwide.

Lib Tech Jamie Lynn, Whales 1994/95
This was Jamie Lynn’s first Lib Tech pro model in 1994 and to show what an impact Jamie’s riding had on snowboarding, he still has a promodel with Lib in 2016. Jamie Lynn’s pro models have always stood out but this whales release is the most iconic of them all. 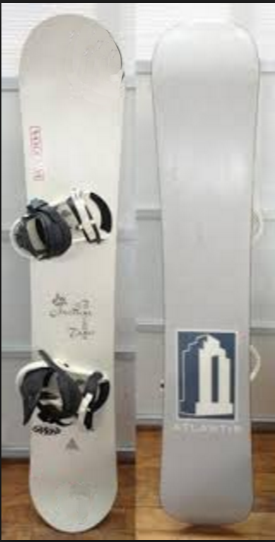 Atlantis Ingemar Backman 1996
Atlantis exploded in the mid 90’s with Daniel Franck and Ingemar Backman being the main two front men for the company. In 1996, Riksgrånsen, Sweden, Ingemar cemented himself into snowboarding legend status with his monstrous 8.5 Meter backside air. Although Ingemar was well known before that air, he was suddenly catapulted into the limelight. Atlantis probably thought all their christmases had come at once with the amount of coverage this board got. 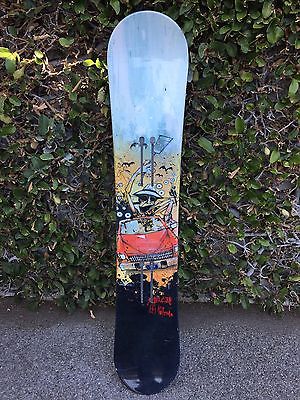 Forum Peter Line 2000/01
Forum Snowboards revolutionised snowboarding and quickly became one of the most popular brands of all time. Peter dropped a Ralph Steadman’s / Hunter S. Thompson’s, Fear and Loathing in Las Vegas inspired promodel, a character he also played in the release of the groundbreaking Forum team video, “The Resistance” 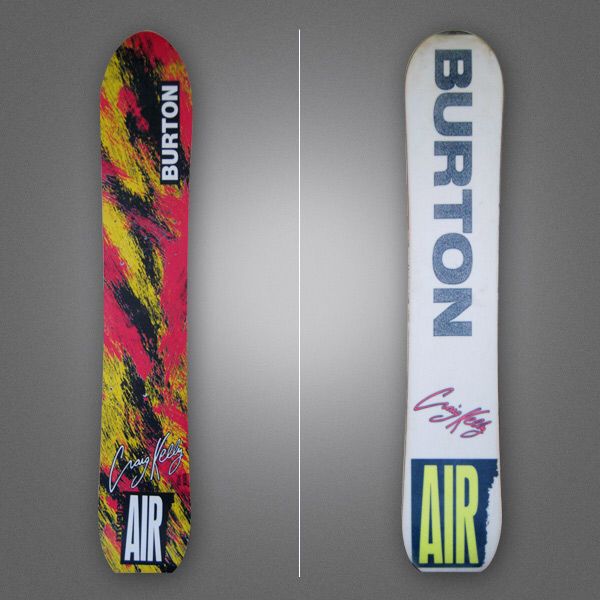 Burton Craig Kelly Air 1990
Due to some contract issues with Craig Kelly and previous sponsor Sims, Craig Kelly rode an unofficial promodel for a season called the Mystery Air . In 19910 Burton released his first official pro model dubbed the mustard/ketchup colourway due to it’s graphics. Craig Kelly was the first megastar pro snowboarder who literally dominated contests during that time period. Although Craig is unfortunately no longer with us, The Craig Kelly Air and it’s futuristic shape will remain iconic forever. 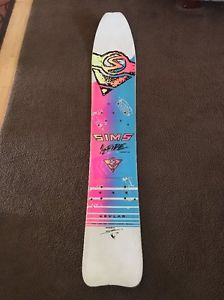 Sims Halfpipe 88/89
Sims and Burton pretty much dominated the market back in the late 80’s and 90’s. The Halfpipe as the name suggests was their pipe/ freestyle board and the shape was groundbreaking at the time. That pink and blue gradient might look suspect today but at the time those graphics were on point. So many people had this as their first board, any list without it is incomplete. 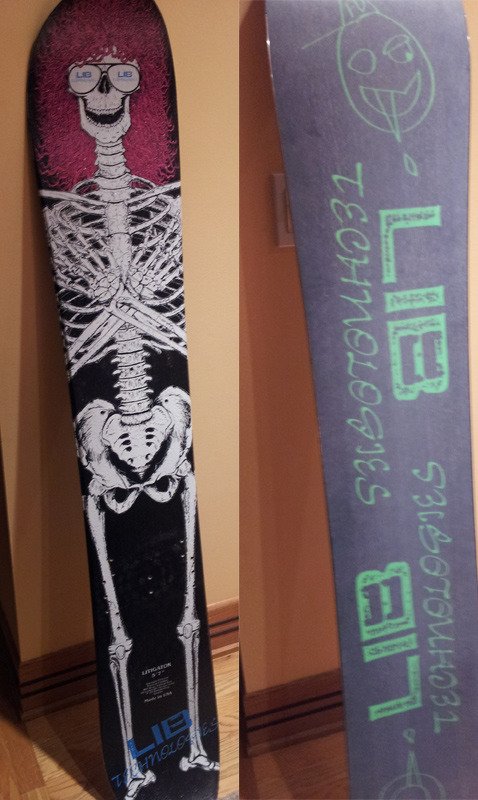 LibTech Litigator 1990
The Litagator with it’s textured topsheet and badass skeleton graphic, was one of Lib Tech’s first run of boards in 1990. All the boards were measured in inches and sold to core shops only, with an one shop per town policy. The Litigator has appeared on several remakes and reissues since it’s release 20 years ago.

Burton Haakon Air 1994
Terje’s first pro model on Burton in 1994 and probably the most collectable with many vintage board collectors calling this their holy grail. This board originally had Terje written on the sword on the base but Terje asked Burton to change it as he thought it was too much to have his name on it as well. Only a few of the Terje sword bases exist and are worth a small fortune as a result. Haakonsen was at the top of his game in 94 and consequently the Haakon Sword brings back nostalgic images of times gone past and many are praying for Burton to re release this graphic in the future.

Thanks to retrosnow.com for providing us with some of these images.

If you disagree with our choices let us know on Facebook here.

#TBT: Halldor Helgason, They Came From