Kevin Backstrom or KB to his friends has all the ingredients to make him one of the most popular riders around. Girls love him, guys wish they had his lifestyle and everyone wishes they had his style. Whilst in the past Kevin received some critiscm for exploits from the Swedish mainstream media, snowboarding in general stood by Kevin and these events lead to him changing his focus from contests to filming and in recent years we have seen his popularity soar. Although Kevin is portrayed as wild, almost rockstaresque character, in reality there lies a quiet and softly spoken individual, something that suprises people on a first encounter. Now Kevin is fully focused on filming more of the ever popular Bynd x Mdls series with his sidekick; Tor Lundstrom and working behind the scenes on their legit big air contest The Ale Invite. Let’s hear more from KB in his own words.

Did you think you would make a career with filming so quickly after you quit competing?

I didn’t know if it was gonna work out or not but I knew for sure that I wanted to give it a try. Since I was a little kid I’ve looked up to some of the guys that put out videoparts. You wanted to do the same stuff as the guys you look up to you know? I’m stoked it all worked out in the end and I’m having way more fun now than I did back in the days when I did contests.

You’ve been focusing on making Bynd x Mdls with your partner in crime Tor Lundstrom for a while now and the show has always had a great response, What do you think makes it so popular? What are the plans for the movie?
Thank you! We didn’t really expect anything when we started it but I feel pleased that people enjoy to watch it. I don’t know what makes it popular to be honest. I guess it’s the lifestyle we have, two best homies traveling the world snowboarding doing stupid shit along the way. New for this year is that we are making a full movie, we got our base in LAAX now, which we couldn’t be more stoked on, the plan is to try and film as much as possible here and do a few trips. We are still gonna release 4 episodes to stay alive on the internet but they will be more behind the scenes and then we save all the best stuff for the movie. We got a bunch of homies joining us aswell so stay tuned!

BYNDXMDLS S4 / CHAPTER ONE / LAAX & JAPAN from BYNDxMDLS on Vimeo.

It seems that people really relate to you and Tor, do you think other riders could get jealous that they are stuck doing serious contests when you guys get to go out and do whatever you feel like?

Haha I don’t know dude. I hope that they enjoy what they do cuz otherwise I don’t see why they keep on going. They could give it a go and try doing something else other than contests, just like we did. But for sure some people might be jealous.

Have you ever spoken or met a fan who was a little too crazy?
Haha I’ve had a few crazy ones but I think it’s funny. I had one that was more scary then fun though, I woke up one night cuz I heard a bang on my hotel room balcony (3rd floor) and then someone was knocking on the window. I open the curtains and I had this girl on my balcony that barely could speak any english, it was fucked up weird…. 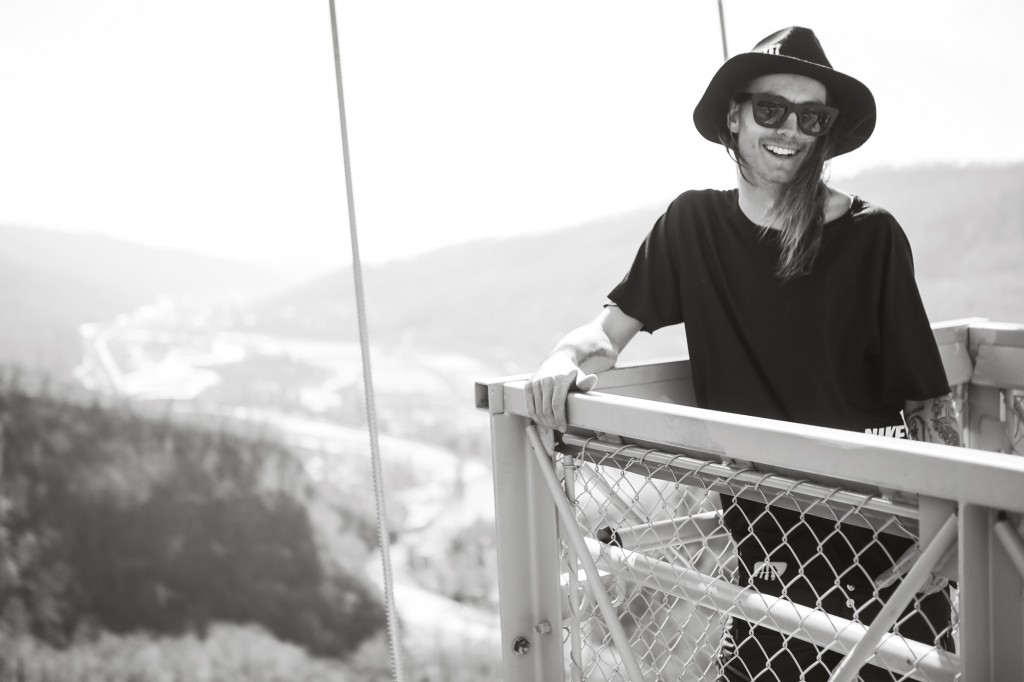 Up in the wilderness avoiding the stalkers.
Photo: Dasha Nosova

You are working hard with Tor on the second year of your own contest, The Ale Invite. How did that come about originally and what can we expect from year 2?
The city of Ale hit us up about doing something out there. They are a really supportive and motivated city so we were down right away. When we started talking about it we had no idea that it would turn in to what it is now.

The most important thing to us is that the riders have a good time at the event because that’s why we do this, we want all the homies to come hang together, ride, party and the contest is an excuse for that I guess haha.

New for this year is that we are gonna have a bigger venue. Last year 9000 people showed up and that blew our minds and it also blew up the whole bar too though because we were not expecting that many people. So this year we are gonna build a way bigger bar so everybody is happy! The biggest news is that the ladies are joining us, which we are really happy about. The contest is also live on SVT, one of Sweden’s biggest tv channels. Svenska Björnstammen is playing live on stage, our homies Zeila & Tracy Irve are playing too!

It feels like you have calmed down in the past few years and aren’t as notorious as a few years back. Do you feel like you are growing wiser with age?
Definitely, I bet everybody is growing a little wiser with age. I’ve done some stuff back in the days that I wouldn’t do today. I don’t regret anything though, I guess I wouldn’t be doing this interview right here if I didn’t do some of the stuff I did back then haha.

Who needs contests when you have this?
Photo: Dasha Nosova

You have the type of sponsors that would be more relaxed than others. Has there ever been a time where they told you to calm down a bit?
Haha yeah that has happened before, not with any of my current sponsors though and that was a few years ago.

Have you ever thought about what you will do after you finish riding professionally?
Not really, but I will keep riding thats for sure!